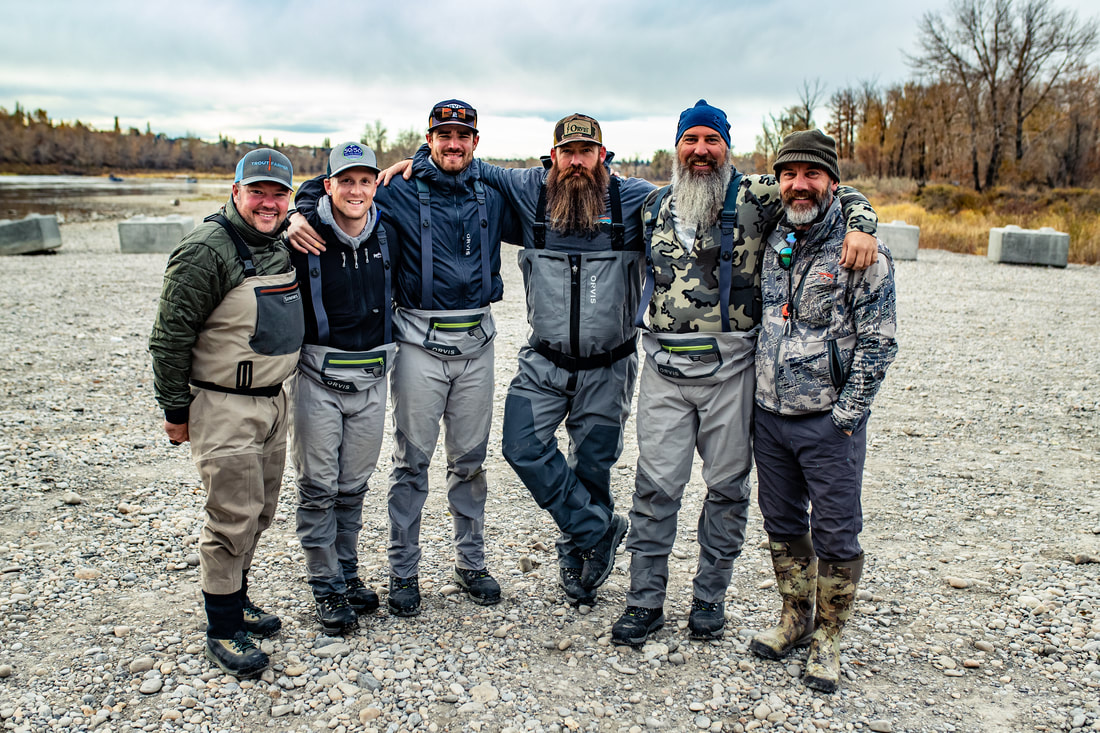 Are you looking for a unique Fly Fishing adventure? Here at Fly Fishing Bow River Outfitters we believe that being a guide is not just being someone who knows how to fish.  We believe that just as important as knowing how to fish is having the ability to teach someone how to fish. Spending a day with us on the river, you will see our burning passion for fly fishing. We will teach you the knowledge, patience and understanding that it takes to truly appreciate the art of fly fishing. Putting our guests on big fish is one thing, but giving you the skill set to catch that big fish is another.  We take great pride in serving you as our Guest and giving you an experience that you will remember for a life time.  Giving our guests a day full of tight lines, loads of laughter and incredible memories is where we set ourselves ahead of other guiding services.
- Our Motto -
A Professional Guide is a professional at all times; they are mentally alert and physically prepared for a strenuous day of guiding. Their self-confidence can be observed but not heard; they are totally prepared for the day and ready to accept its challenges—good or bad. Their appearance and dress show pride in themselves and the operation they represent. They immediately become a teacher to their clients and the client readily accepts their leadership. 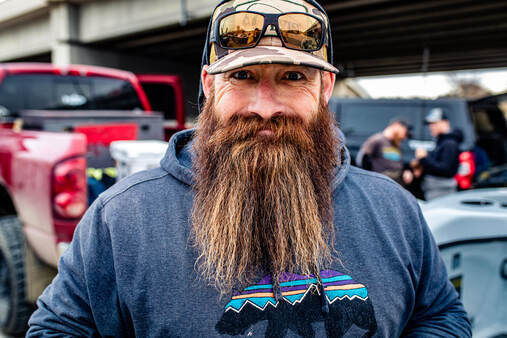 DANA LATTERY
HEAD GUIDE/OUTFITTER
Born in Alberta, raised in the back-country. Fishing, hunting, nature, the wild, all run thick in his blood.
Lattery's passion for fishing and hunting was cultivated as a boy during the summer when he spent as many days as he could fishing local rivers and lakes, and during the many winters he spent hunting deep within the mountains, on 10 day horseback trips in search of trophy Big Horn Sheep. He can still remember the first day he tried fly fishing, he knew he had found a lifelong passion, and he dove head first into the sport, never picking up a spinning rod again.  Although his desire to be outside grew stronger every year, Dana was forced to balance his time with his other passion, hockey. At the age of 15, fishing and hunting took a back seat, as he moved away from home to pursue his hockey dream. Hockey moved him from Victoria, to Western Michigan University.  Western Michigan University is where he graduated with a degree in Pre-Med and a minor in Psychology but his education would have to be put on hold.  Soon after, he made it big playing professional hockey for Calgary Flames, Boston Bruins, Phoenix Coyotes farm system. Throughout these hockey years, his deep seeded passion for fishing, hunting and the great outdoors burned deep inside.
Hockey came to an abrupt end when Lattery blew out his knee in the summer of 2005. What was a big blow at the time enabled Dana's other passion to resurface, and take the drivers seat. He put his schooling in Veterinarian Medicine on hold and took a job as a custom cabinet builder to give him the freedom to drop work on a dime and go fishing and hunting.
Destroyed by one dream, inspired by another, Lattery jumped headfirst back into the outdoors. The first year without hockey Lattery spent every day of the season on the river, in the bush, or on the side of a mountain feeding his hunger.  After many years of fishing and hunting, he was introduced to guiding fishing and waterfowl. Such a natural fit, a job where he is outside everyday sharing his greatest passions with people. Spending over 100 days a year in the river and close to the same in the fields hunting waterfowl, Lattery began to pursue the art of Videography and Photography near the time that he started guiding. His photography has been published in many facets, including summer 2018 issue of Fly Fusion Magazine Cover, and just recently in the Winter 2018 issue of Fly Fusion! He just recently  shot a film for IF4 2017 title Ty's Flies, and HOME WATERS for Orvis Down the Hatch Film Festival. The Fly Fishing Bow River Crew Just spent January 2019 over in Oman filming a fly fishing film with Noukhada Fishing Charters.  He plans to continue flying all around the world in pursuit of catching and capturing his greatest passions. Dana looks forward to sharing many stories and memories with you whether in his Hyde drift boat, or walking with you along the rivers edge! 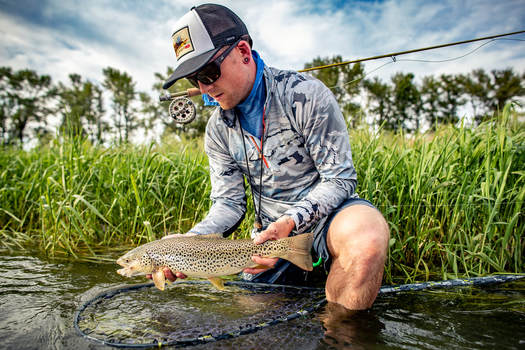 TIM HEPWORTH
Tim was born in central Alberta into a family infused with the outdoors in their blood. Tim is the youngest of nine children, and that alone has taught him all the essential survival techniques he needs. Tim has lived in the outdoors from the time he was big enough to be in a backpack. From hunting to fishing, hiking and beyond, Tim is at home in the woods. After high school Tim pursued a diploma in kinesiology which led him into Cross-fit, and he still coaches it today. Tim still found it hard to manage his time well enough to have the time in the outdoors he really wanted. Tim then pursued a career in ems as a Primary Care Paramedic. This was a great fit for him and gave him lots of time off to fish and hunt. It has also given Tim all the freedom to guide that he wanted. Tim has been fly fishing for almost ten years and absolutely loves sharing his passion with anyone and everyone. Most of all he loves fishing with his daughter Wren. About the only time she’s not out with him is when he has clients. Tim is passionate about the outdoors and strives to be an ambassador for sustaining it. Tim loves people, from caring for them in an ambulance to getting them their first fish on a fly rod, he will help make your day memorable. Whether in his Hyde Low Pro Xl drift boat,  or wading a mountain stream, Tim looks forward to making and sharing memories with you on your next guided trip. “If you're on the Water there is no such thing as a bad day!” 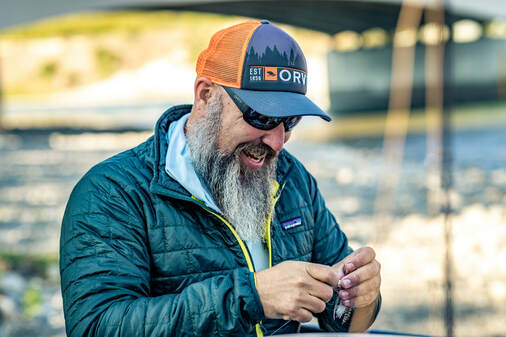 Troy Langelaar
Troy started fishing around the age of 8.  Being the only one in his family that loved the sport, he would bike to local stocked trout ponds, or to the river through town.  He would do what he could to get out and wet a line, and be in the outdoors.
​  Troy took his first survival/hunters course at the age of 12.  Growing his passion and love of the outdoors.  Also joining military cadets at that same age, he took every opportunity to sign up for survival trips, or spending time on the water at sailing camps.  Although the only one in his family who loved to fish, his parents encouraged his passion .  They would even take him to the west country so he could wander the rivers to fish.
At the age of 17, he bought his first fly rod.  That was it.   He caught the bug.  Already having a driver's license, the west country was where he would now spend his free days.
At 19 he moved to Abbotsford, BC.  Keeping with his fishing passion, and the ability to fish 12 months of the year, he was able to spend the time learning to fish the lakes of BC as well as the rivers.  This also was the start of fly fishing for salmon.  Heavier rods and a new learning curve .
10 years later he moved back to Red Deer, Alberta.  With a deep rooted love for fly fishing, he took on the challenge to get out, and always trying to get his friends to fall in love with the sport as well.
​  In 2014 he was able to make a start of living out one of his dreams, and opened his own fly fishing shop.  Through having the shop, guiding was another area he was able to pursue.  Teaching people the love of this sport is truly a passion of his.  Serving clients, and giving them an experience that they would remember for a lifetime 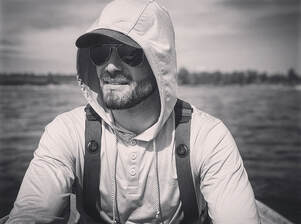 ​     Alberta boy, born and raised. Brandon has had a deep passion for fishing since the day he was born. Coming from a family of outdoor enthusiasts, every chance to get outside and fish was not taken for granted. Playing high level hockey for the better part of his life, fishing and the outdoors took the backseat while he chased his childhood dream of eventually playing in the NHL. Although this childhood dream didn’t come true, playing several years of junior and eventually ending his career in his hometown of Airdrie, this now opened the doors to start pursuing his other passion, fly fishing. Although there were a few bumps along the road, choosing sobriety in October of 2015, providing him with lost time and motivation to dive fully into fly fishing. Brandon has been around fishing for nearly 20 years, specifically targeting fly fishing nearly 10 years ago, he knew he wanted a career in the fishing industry. As the passion grew, tying flies led to building custom rods, building custom rods led to recently starting up his own company called Classic Custom Rods.
Being a student of the game, Brandon is constantly looking for ways to improve and grow as an upcoming guide. Ensuring that who ever he shares the water with, enjoys every minute of it. Having an outgoing, relentless personality, Brandon will go above and beyond to make your experience on the water one to remember. 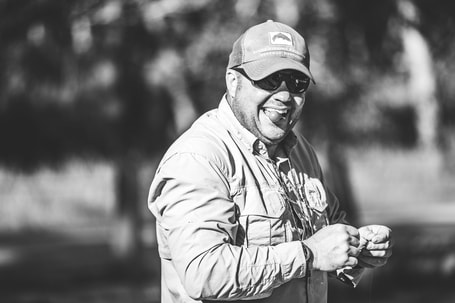 SCOTT PLETSCH
Scott grew up west of Calgary Ab and has never strayed far from home.  He now resides in Cochrane where he and his wife raise their 2 young children.
He was introduced to fly fishing by his grandfather at a young age and grew up trolling flies on lakes in the interior of BC.  This is where a strong family passion of the outdoors and wilderness was passed on to him.
Through high school and university, Scott spent his summers working at a fishing resort in the Kamloops area.  This furthered his passion for fly fishing, and served as a great learning opportunity to interact with the many guests that stayed at the resort. Scott was also mentored by a number of the local anglers and had the opportunity to fish many of the quality lakes that the Kamloops region has to offer.
Scott attended University of Calgary and completed a Bachelor of Kinesiology.  While in school he took many Outdoor Pursuits electives, and was an avid rock and ice climber.
In the last year of university Scott moved home and joined the local volunteer Fire Department which changed the direction of his life.   Scott fell in love with the fire service and spent the next number of years working to make it his career.  At the time firefighter jobs were scarce so he pursued EMS training. He ultimately became an Advanced Care Paramedic working on an ambulance until he realized his dream and was hired as a full time Firefighter/Paramedic in 2007.  Scott is currently a Lieutenant and a member of both the Swift Water Rescue and Technical Rope Rescue teams.
As exciting and rewarding as being a Firefighter is, Scott’s most important job is raising their 3 year old daughter and 6 year old son along side his wife.  Fergus, his 4 year old chocolate lab rounds out the family.  His shift work schedule allows lots of ‘dad time’ and lots of time on the river.
Scott is excited to spend time with you on the water openly sharing his knowledge and is just as excited to learn in return.  The water is a special place for Scott where he believes that there are truly no bad days.